In an increasingly health-conscious society, a prominent manufacturer of healthy snacks made from sweet potatoes, beets, parsnips and other vegetables was experiencing tremendous growth. As a result, they found themselves in violation of biochemical oxygen demand (BOD) and total suspended solids (TSS) limits set by their city’s sewage treatment plant (also known as a publicly owned treatment works or POTW) and bad press for not being environmentally-friendly.

For a plant that produced nearly 70 gallons of water per minute (GPM), the previous wastewater system could only effectively treat about 35% of their effluent. This caused many issues including the following:

Many factors contributed to the facility’s wastewater contaminant loading including:

Achieving compliance and regaining the company’s good name was paramount. In the face of increasing production and decreasing effluent limits, it was also important that the POTW surcharges were eliminated.

Not knowing where to start, the snack foods manufacturer reached out to MacDermid Envio for consultation. We started with a comprehensive audit of their facility which included an evaluation of their daily production cycles, testing water samples and communicating with their POTW directly. From this audit, we developed an optimal treatment solution using our modules to handle their effluent level challenges.

Summary of equipment and services provided:

Realizing the importance of removing heavy solids first, we installed a side-hill screen for heavy solids removal, an oil/water separator, pH adjustment and chemical treatment.  A new dissolved air flotation system (DAF), which brings solids to the surface and sends cleaner water to the POTW, greatly reduces BOD and TSS. Solids were then treated and filter-pressed (both new processes) so it could be easily shipped as feed for animals.

We also provided the facility with a cost-effective, long-term chemical services program through our Performance Guarantee Program.

Cost reduction and a lasting relationship

Shortly after equipment installation and optimization, the company was 100% compliant with POTW requirements.  Within five years, surcharge savings of nearly $500,000 justified the capital and ongoing treatment costs.  However, the primary benefit was eliminating discharge exceedances to regain the company’s good name and high standing in the region.

Today, more than a decade after installation, we are still in partnership with this healthy snack foods manufacturer. If the regional POTW lowers its discharge limits again, we’re in a position to keep the manufacturer in compliance. As a Performance Guarantee Program participant, this client also receives enhanced support and special discounts. 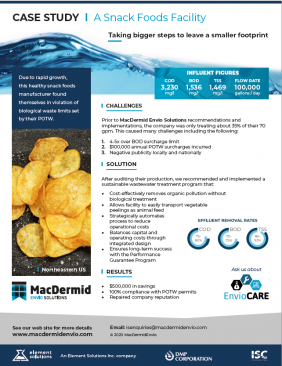