Aerospace facilities are among the most high-tech plants in manufacturing, and they require an efficient, effective wastewater treatment system.

However, in many cases, even industry leaders can find it difficult to make wastewater treatment a priority over the many other critical processes in aerospace manufacturing that demand attention.

One southern California plant, a supplier for aerospace juggernaut Boeing, was using an out-of-date, 25-year-old wastewater treatment system that was introducing several problems into their overall operation.

The plant was due for an upgrade that would allow for more efficient operation and the ability to keep up with tightening regulations.

With such an old system and new regulations, onsite treatment was challenging

The plant’s original wastewater system featured some automation, but corrosion had significantly reduced its functionality over the years.

Also, cadmium cyanide, a common contaminant in wastewater from aerospace and military manufacturers, had proven difficult to eliminate, causing several wastewater treatment providers to refuse to take the project.

Because of this, the company found it difficult to meet discharge limits due to high levels of dissolved metals in its wastewater.

When the company initially met with MacDermid Envio Corporation, it hoped to get by with just a few upgrades to its existing equipment.

As with all its clients, MacDermid Envio examined the facility, analyzed influent and effluent streams, spoke with the manufacturer’s experts, and suggested several potential upgrades.

However, to truly address the manufacturer’s issues and ensure the company could be agile in resolving potential problems in the future, MacDermid Envio suggested another solution – a complete overhaul of the wastewater treatment system.

MacDermid Envio also installed the technology necessary for water recycle, allowing the company to dodge the water shortage that has plagued its region. Better methods for cadmium cyanide removal was part of the new process, leveraging MacDermid Envio’s decades of experience in the aerospace manufacturing industry.

The manufacturer was impressed with MacDermid Envio’s service, including our extensive knowledge of the industry and ability to provide answers to every question and solutions for every problem.

Though upgrades were not sufficient, MacDermid Envio made necessary efforts to explore all potential paths before settling on the final way forward.

Moreover, we were timely in our response. The manufacturer felt MacDermid Envio was invested in its needs and prepared to deliver results.

With the new system installation, the aerospace manufacturer: 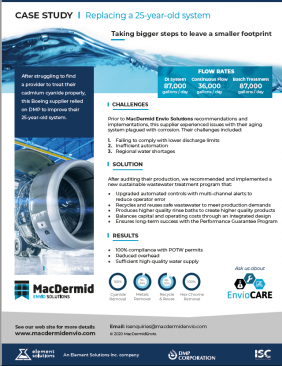